Case study of a NZE retrofit in a cold climate

ASHRAE is synonymous to holding high energy efficiency benchmarks. The organization purchased a 1970s mid-century building to relocate its global headquarters to Atlanta by renovating this 67,000 sft facility into a NZEB. ASHRAE was very clear about its objectives – to develop a project that is economically feasible, scalable and replicable by an average building owner to achieve net-zero. The project aimed to showcase the latest technology achieving superior efficiency and comfort with net-zero operation while representing the organization’s sustainability values.

In this webinar, Shreshth Nagpal (Principal, Integral Group) enumerates the design principles and energy optimization strategies adopted by the team to develop a high performance facility. 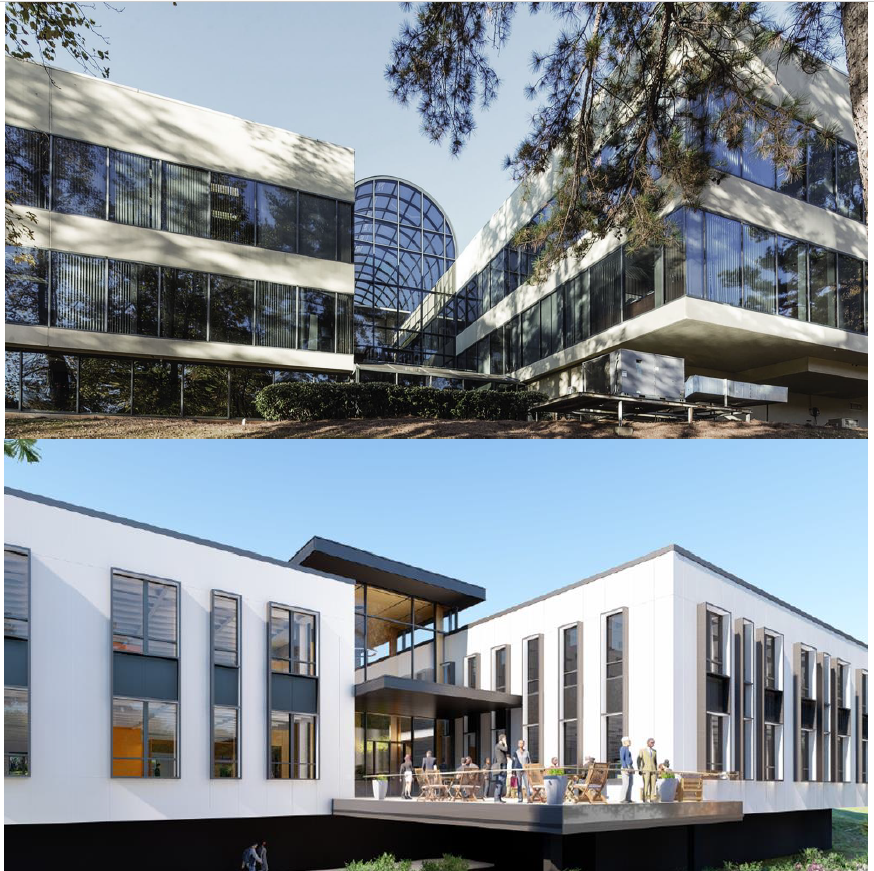 Sresth starts by describing the program requirements and the vision of the project team. A conventional building of equivalent area with limited energy conservation measures in place, would average at an Energy Use Index (EUI) of around 36 kBtu/sq.ft/yr [105 kwh/sqm-yr] whereas ASHRAE had set a target at around 30 kBtu/sq.ft/yr [88 kwh/sqm-yr].

Since the building is envisioned as a net-zero facility, the RE generation must offset energy consumption. According to a preliminary solar generation analysis, the 14,000 sft building roof with a total installation of 210-260 kWp capacity solar PV would offset around 17 kBtu/sq.ft/yr [50 kWh/sqm-yr]. Hence, this became the new benchmark, which is around 52% lower than the baseline target! In order to push the boundaries of building performance, it was pertinent for the project team to chart a systematic approach to bring down the thermal load.

The first step to energy reduction in this project has been incorporating passive design strategies to increase thermal and visual comfort while reducing the energy use, This alone could reduce the EUI from 30 kBtu/sq.ft/yr [88 kWh/sqm-yr] to 19 kBtu/sq.ft/yr [56 kWh/sqm-yr]. Some of the strategies included optimization of the facade, enhancing daylight and program organization. To limit heat ingress into the building, the east-west facades have been designed with a lower WWR of 30% compared to the 40% on the north-south facades. Strategically placed vertical and horizontal shading systems cut-off glare and excessive heat. For better daylight penetration, skylights are punched over the circulation areas. Further, the envelope was optimized through a sensitivity analysis. In terms of zoning, the spaces are stratified such that all the zones with similar space conditioning and daylight requirements are clubbed together.

The designers expand the comfort range by adopting a mixed-mode ventilation system. When the outdoor conditions are optimal, the windows can be opened to channel fresh air. Further, ceiling fans help elevate airspeeds and enhance thermal comfort. In terms of systems, the design team have installed radiant ceiling panels and Dedicated Outside Air System (DOAS) to isolate the sensible load from ventilation requirements. The DOAS takes care of the heat recovery from the exhaust as well as demand control ventilation. Through these measures, the team reduced the EUI to 16 kBtu/sq.ft/yr [47kWh/sqm-yr] 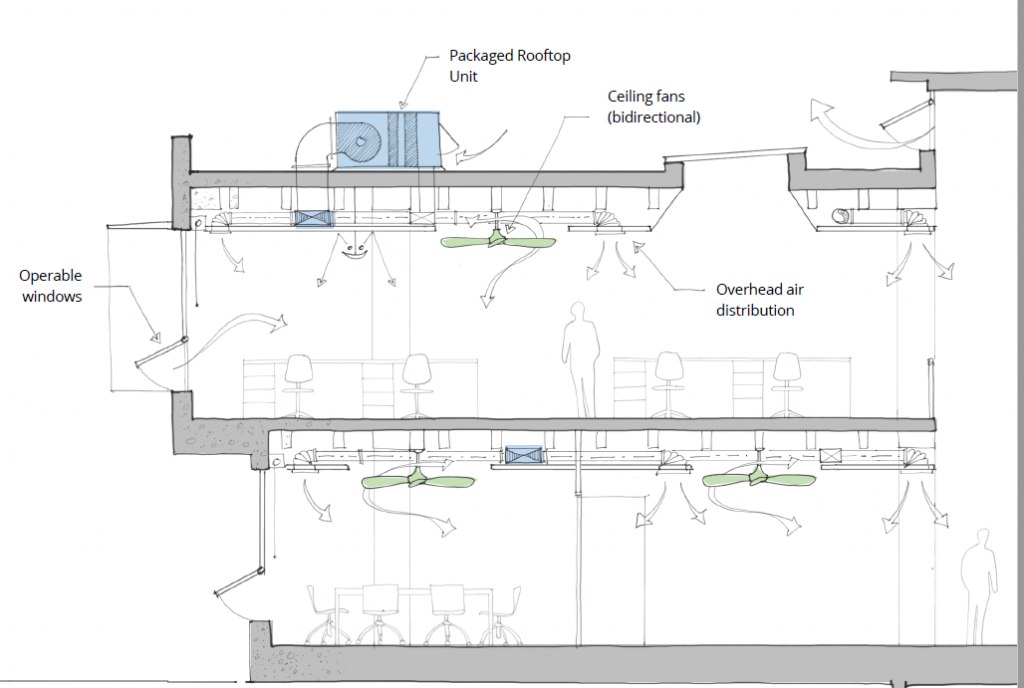 Active Controls incorporated in the building

The design team showcased the viability of retrofitting an average conventional building into a high performance net-zero facility by implementing the right strategy at the right stage.

This webinar was conducted on 6 September 2019.

Shreshth Nagpal is a Principal at the Integral Group, that is providing engineering design and analytics services for this project.

Shreshth’s professional focus over the past fifteen years has been to understand and model building performance that results from the interaction between envelope configuration, climatic context, functional requirements, conditioning systems, and occupant behavior. More recently, his doctoral research focused on developing automated workflows to construct living urban energy models that are designed to systematically explore future energy scenarios and identify areas of maximum potential savings. Shreshth especially enjoys working on projects with a focus on designing with passive strategies for thermal and visual comfort; and has completed specialized building-physics analyses to help inform design decisions of several award-winning projects that represent a broad spectrum of types, scales, climates, and performance goals.

Q1. There was a nearly 30 percent reduction in the plug loads compared to the Baseline. How is that achieved?

The plug load reduction was driven by ASHRAE’s own project requirement. An Owner’s Project Requirement (OPR) was issued where ASHRAE established the criteria for the design team. They dictated that the plug load intensity for the project should not be over 0.5 watts per square foot for the entire building. It was slightly beyond the regular design process, but based on experience, we knew that it was possible to design projects to hit that level of energy.
The Baseline plug loads are based on certain assumptions and industry standards. But the plug loads were strictly based on the criteria ASHRAE had developed for themselves. Another reason is that the lighting did not use plug loads. About 75% of the floor was daylit or would get useful daylight. And so those were the two things that ended up achieving that 30% reduction.

Q2. What features of the original building are being retained?

Besides the form and the orientation, we’re changing the windows, existing precast panels of the windows. They are trying not to generate any construction waste that does not need to be generated.

Q3. Can you elaborate on the impact of nighttime ventilation considering that the office has a minimal occupancy?

Nighttime flushing does not relate with occupancy. In principle, if you night flush the building, because of the diurnal swing, you charge the thermal mass (concrete slab). The ceiling fans in this project are bidirectional. In the night time, run the fans in the reverse directions so cold air is pulled in through the windows or through the economizer operation. When people start coming in during the day, the radiant field is very different from what it could have been if the building was completely sealed. Now that you have a cooler radiant temperature, the thermostat or the radiant systems have to do a lot less work. Only after the thermal mass has managed to absorb enough internal gains during the course of first few hours is when the radiant system start working for the rise in temperature. The number of hours that you don’t need to rely on systems once office start getting occupied increases significantly and you can meet the comfort criteria passively for lot more hours if you manage to recharge the thermal mass at night.

Q4. Was the final design option based on EUI or cost?

Cost. Because in all projects cost is always the main criteria. ASHRAE is more aware and more driven trying to hit the EUI target more than anybody else. But cost was very more important for this specific project because it had to set the standard on how much money one needs to spend to hit the Net Zero Energy target. One of the targets was to show that you don’t need to spend a lot of money to be able to hit this level of performance.

Q5. What is the software used for the PV analysis?

The analysis for PV was done using Radiance. It helps take into account self-shading impact and shading impact from trees and other obstructions. It helped account for every loss factor or cell shading factor or potential relation from all surfaces.

Q6. Is it demand control ventilation in the Oval Office?

Yes. With having varying occupancies, it was a no brainer.

Q7. Was there any challenge convincing the client for any particular strategy?

No. The client was very eager to use any strategy that made sense for the project. The challenge was to do that within the set cost constraints.

Surrogate modeling outputs must be very reliable as they point you in the right direction. You use mathematical and statistical tools to narrow down what you start with. Once the project reaches the design table, you rely on actual engineering models.