The six simple structures on the 4.3 acres site are planned such that the academic and residential areas are provided within every building block. This approach ensured all areas on the campus was being used throughout the year and dead zones were avoided. The priority of the design team was to conserve all available resources and integrate it an efficient and sustainble manner. We learn more about the high performance design strategies and resource management details from the project architect – Samuel Barclay (Founder, Casedesign) in this webinar.

The first critical resource that was examined in detail was the use of water. The team studied an existing excavation of an artesian well over a span of a year and designed a system to replenish the water levels by rainwater harvesting. On the other hand, the wastewater from the building undergoes series of filtration through reedbeds (bioremediation) and carbon filters on its way to a polishing pond where it is exposed to UV from the sun. This water is then used for watering the landscape and is distributed throughout the campus via pumps and aqua ducts. 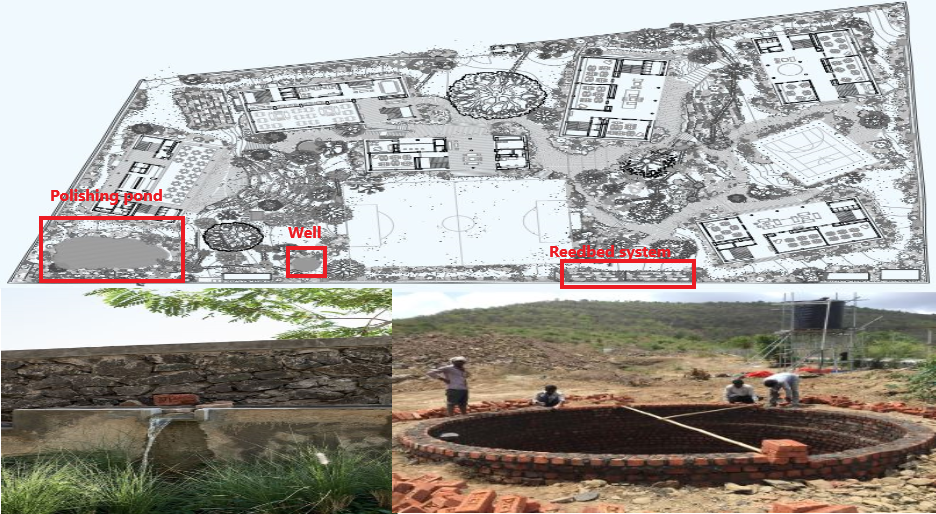 The simplistic design of the building was referred by the architect as “intelligent dumb boxes”. At its core, the structure is a simple grid of beams and columns using cast in-place concrete. Use of post-tensioned prestressed slabs reduced the number of columns giving the spaces an open look and feel. The partition walls were constructed using flyash blocks. The team reclaimed old teak wood doors from abandoned buildings and refurbished them for use in the campus. Composite marble created using waste glass was used in various interior applications. The pavement was designed using waste stone pieces procured from quarries in a beautiful mosaic pattern that naturally emerged due to the irregular shape of the stones. All these elements give the buildings and the campus a lot of character.

The simplistic design and use of salvaged building materials not only made economic sense but also resulted in low embodied energy. 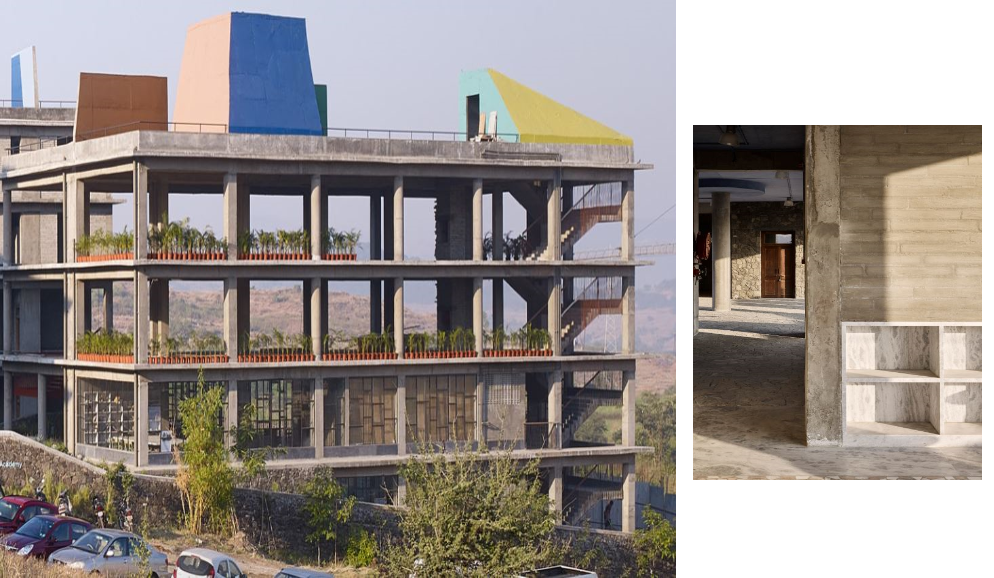 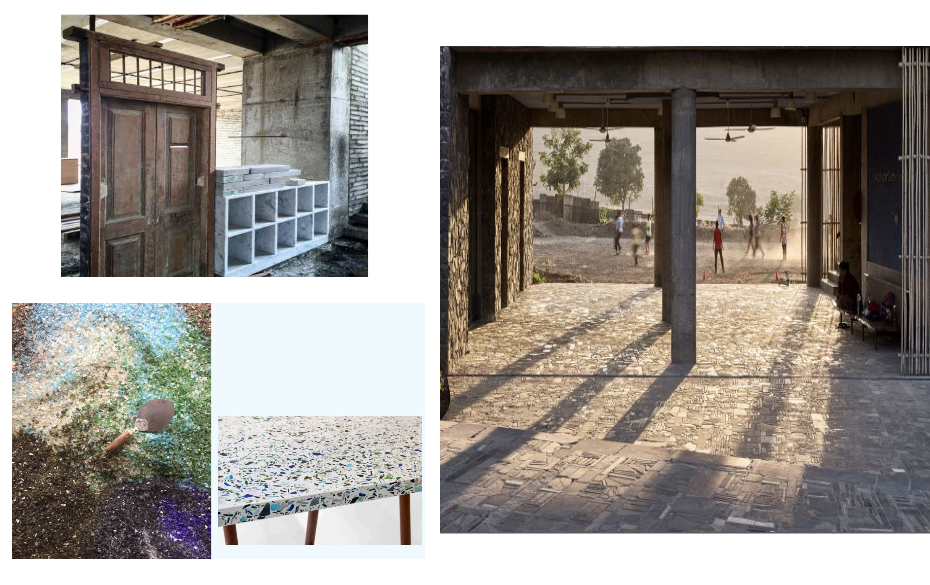 Considering the large open spaces in the building, adequate shading and rain protection was imperative. This was achieved by designing a smart layout. The dorms are planned with large exterior public areas that form a verandah preventing direct sunlight from reaching the rooms. Vertical bamboo screens used on the periphery diffuses sunlight and provides rain protection.

Also, most of the classrooms are planned on the north side of the building to avoid direct sun. The light coloured walls and roofs ensure the depth of daylight penetration reducing the need for electrical lighting. The buildings are fitted with LED light fixtures. 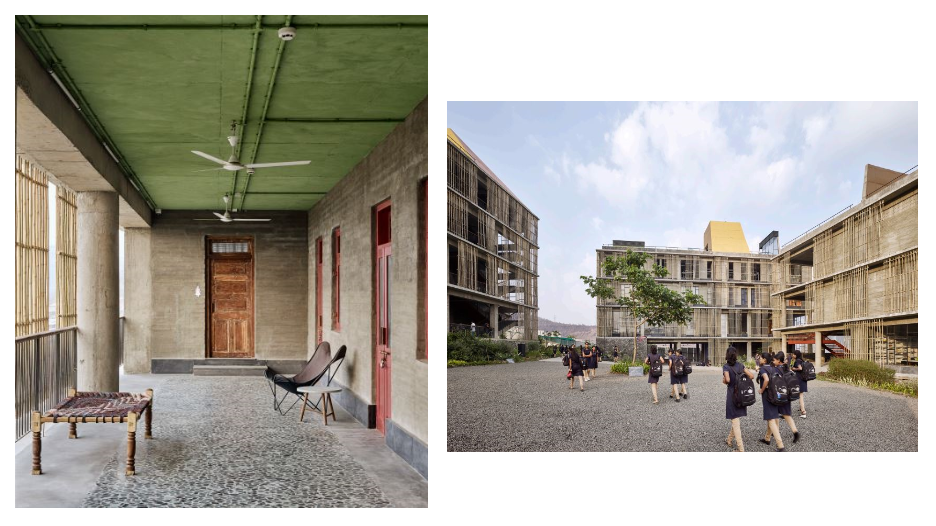 The team from Transsolar KlimaEngineering designed earth ducts and solar chimneys in the building which is integral to the passive solar design strategy. Outdoor air enters a series of earth ducts located underneath the building where it cools down and then enters the classrooms. Warm air exits through the opening closer to the ceiling into the central duct of the building. The glazing of the solar chimney is exposed to sun which in turn heats the air inside the duct creating a large temperature difference between the duct and the classroom spaces. This creates a suction pulling the air out from the classroom resulting in natural ventilation in the space. The thermal mass of the exposed stone floors drives the process through the night once it starts radiating heat. 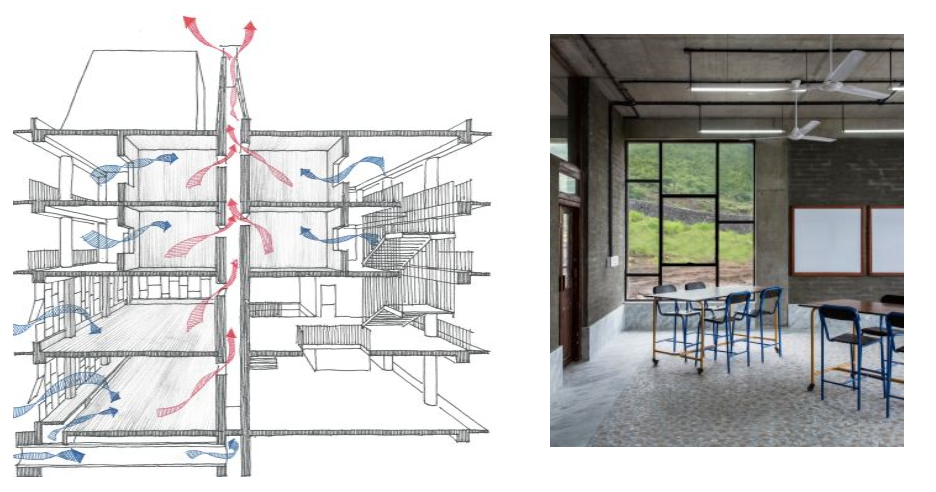 This project proves that passive design strategies can provide thermal comfort even in a large building while sharply reducing the energy demand. The residual demand can be offset by a renewable energy system to achieve Net Zero Energy goal. Other thoughtful approaches in overall planning, smart water management and low energy material selection showcase that sustainability is a matter of choice and not a result of budget constraint.

Samuel Barclay practised in Los Angeles with Studio Works Architects before moving to India in 2006 to work with Studio Mumbai and founded Case Design in 2013. In addition to his experience in the design and construction of architectural projects, he has worked on furniture, interiors, and exhibitions and founded the brand Casegoods in 2015.

Q. Is there a reasoning behind the placement of the bamboo louvers?
Yes. The placement of screens and the density of bamboos used was based on the kind of performance required. For example, the north façade faces less sun and rains, hence they had less density screens whereas the south and southwest façades had not only more screens, but also a denser pattern of screens. Overall, there were three different density of screens used based on the requirements.

Q. How is the filtration of water done? Does the filter water carry any odour?
There’re are two kinds of filtration systems in place:
• Clean water: The water through the well is filtered through reverse osmosis before use as drinking water
• Greywater: It is filtered through a series of reedbed system, carbon filters and sand filters before reaching the polishing pond. At this stage, before use, there is no odour in the water.

Q. Was the idea of a high-performance building explicit in the brief? Or was it a consequence of a smart and sensible design?
It was not something that was specifically asked for, but they were very supportive of the idea when CaseDesign pushed for it.

Q. How is the sound transmission from solar chimney ducts from one space to the another managed?
Very simple baffles have been placed to keep the noise travelling from one classroom to another. But these aren’t sufficient. A bigger issue is the acoustics of the room. Implementation of the proposed acoustical treatments for these spaces is subject to budget availability.

Q. How does the dark color on the walls in the solar chimney effect its performance?
Transsolar KlimaEngineering informed us that it’s more the material properties (thickness, material properties of the concrete, etc.) of the wall than the color of it.